First an apology. I’ve been sitting on this cover reveal for, you know, forever. Or at least it seems like that. I was given the go-ahead to reveal away a few weeks ago, and then it sat on my to-do list getting stagnant. Not as stagnant as the leftovers in the back of my fridge I keep giving the stink eye, but close. And then Amazon beat me to it and took all the wind out of my sails. Which, as I already explained, I completely deserved. Oh well. Let’s pretend that didn’t happen and do the reveal here anyways. Shall we?

SO! Book TWO! The questions will be answered, and you will finally find out WHAT IS IN LAKE MICHIGAN!

Sorry for the cliff hanger ending on book one guys, really and truly. In my defense, when my book was sold to HarperCollins, it was sold as a two book deal, which meant I took my original manuscript and cut it in half to make two books. Well, not really in half. More like 70/30.  Either way. I had to make the middle of a book FEEL like an ending, or at least a little bit like an ending so there would be enough excitement left over for book two. It was hard. I’m not sure I did such a great job of it. BUT. Guys. Bear with me, because book two is good. Really good.

So clearly my judgement can’t be trusted. I’ll let you decide. Deal?

I detailed how the cover for book one evolved here. And I thought it would be nice to do something similar for book two.

Similar to book one, I was told by the brilliant Powers-That-Be what scene they’d like to see on the cover. I whole heartedly agreed with their choice, but as soon as they mentioned the scene, I knew how I wanted the cover to look. 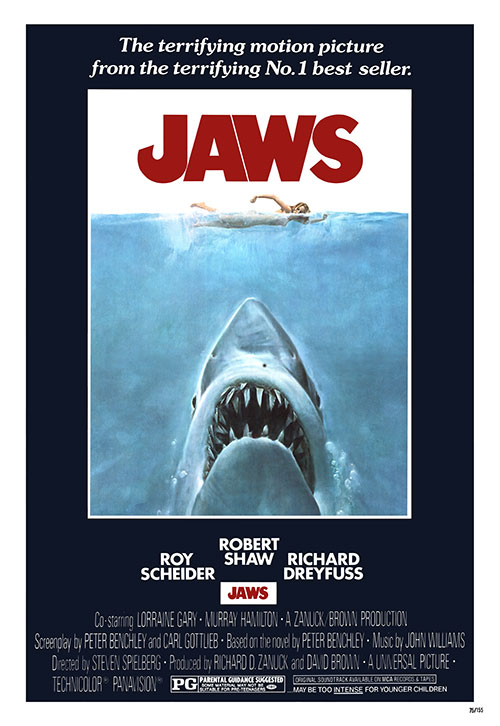 (Those of you who know me well will know how hilarious this is since I’ve refused to watch the movie the entire way through. Every time it’s on TV I watch until the shark shows up. Then I peace out. Because-I’m a big chicken. The End.)

There is something wonderfully terrifying about this image isn’t there? I love the fact that you get to see what is below the water and above the water.

So the first sketch we got back from Eric looked like this. 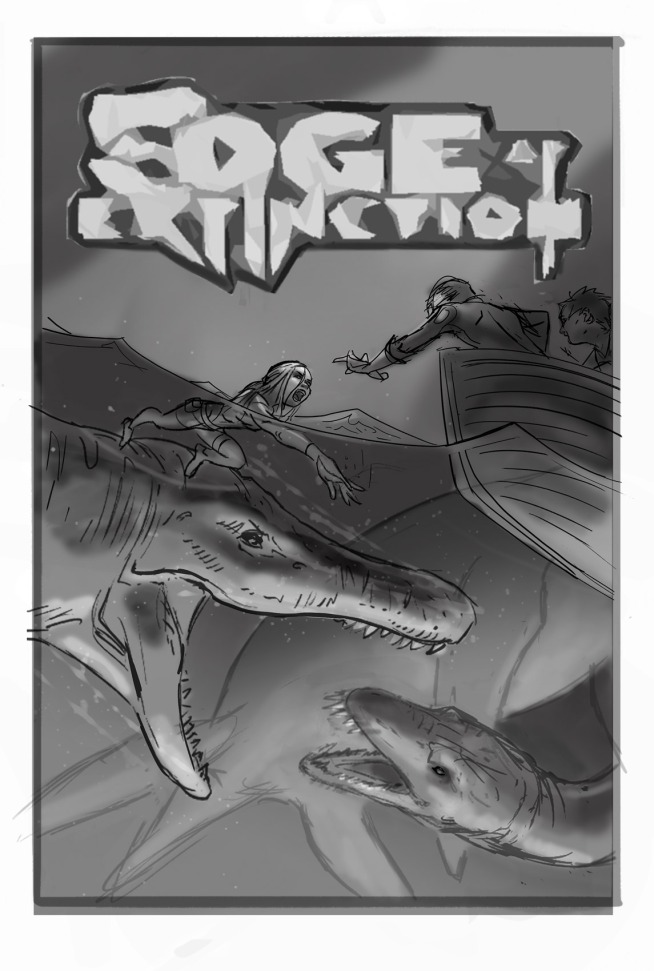 It was GREAT. But, just like with the cover for book one, I had a few things I wanted tweaked. Thankfully, Eric is a patient man.

The first was the Kronosauraus in the foreground. You’ll meet him in book two. So will Sky and her friends. That’s all I’m saying. BUT the problem was that his profile looked a little too similar to the Spinosaurus profile from the cover of book one. Totally my fault. I apparently have a thing for toothy, crocodile-like dinosaurs. (Although, if we’re being accurate the Kronosaurus is NOT a dinosaur. It’s a pre-historic marine reptile. But if you want to call it a swimming dinosaur, we can still be friends.) 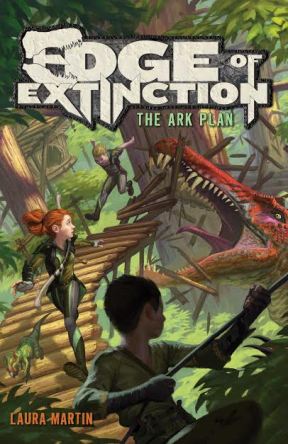 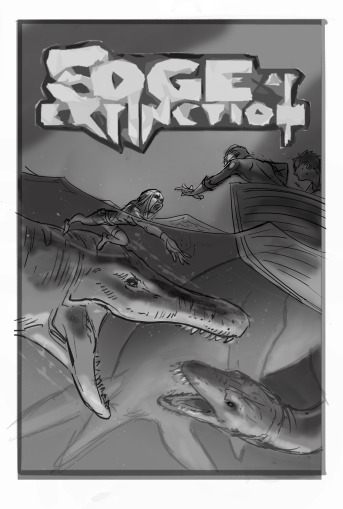 This was an easy tweak, and Eric just rotated the big guy so his fins were clearly visible. The other issue was our long-necked friend the Elasmosaurus. I was worried that in the original sketch his neck was a bit to bendy ala LochNess Monster. 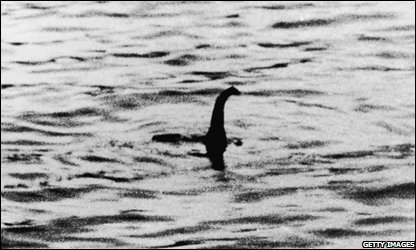 Research has shown that while the Elasmosaurus was a fierce predator thanks to that neck, he couldn’t bend it like a swan.

Here was our next sketch. 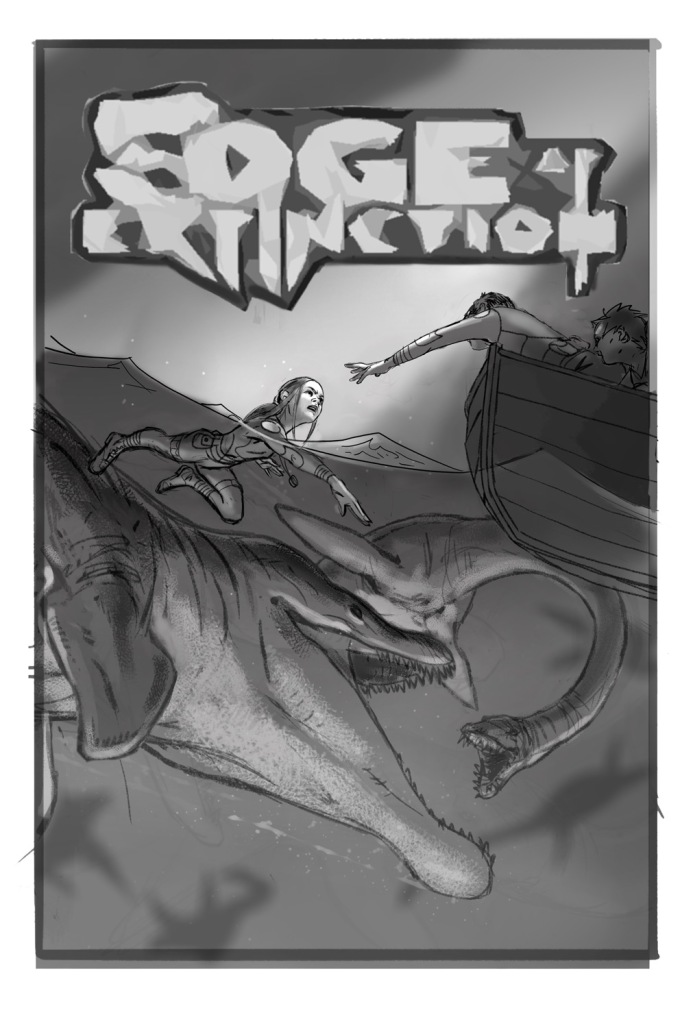 MUCH BETTER! My only remaining issue was with Sky. I don’t know why, but it didn’t look like her. So I made poor Eric mess around with her body placement. Arm up. Arm down.  Poor girl was doing the hokey pokey there for a bit. (I mentioned Eric was awesome right? And so very very patient. Bless him.)

Then I asked him to work on her face. Don’t ask me why, but it just didn’t look like Sky, something about the eyebrows? Her hair? I couldn’t put my finger on it.  Thankfully Eric send me lots of options and I was able to pick one that felt a bit more like Sky.

SO. Drumroll please!  Here is the FINAL Cover for Book two. 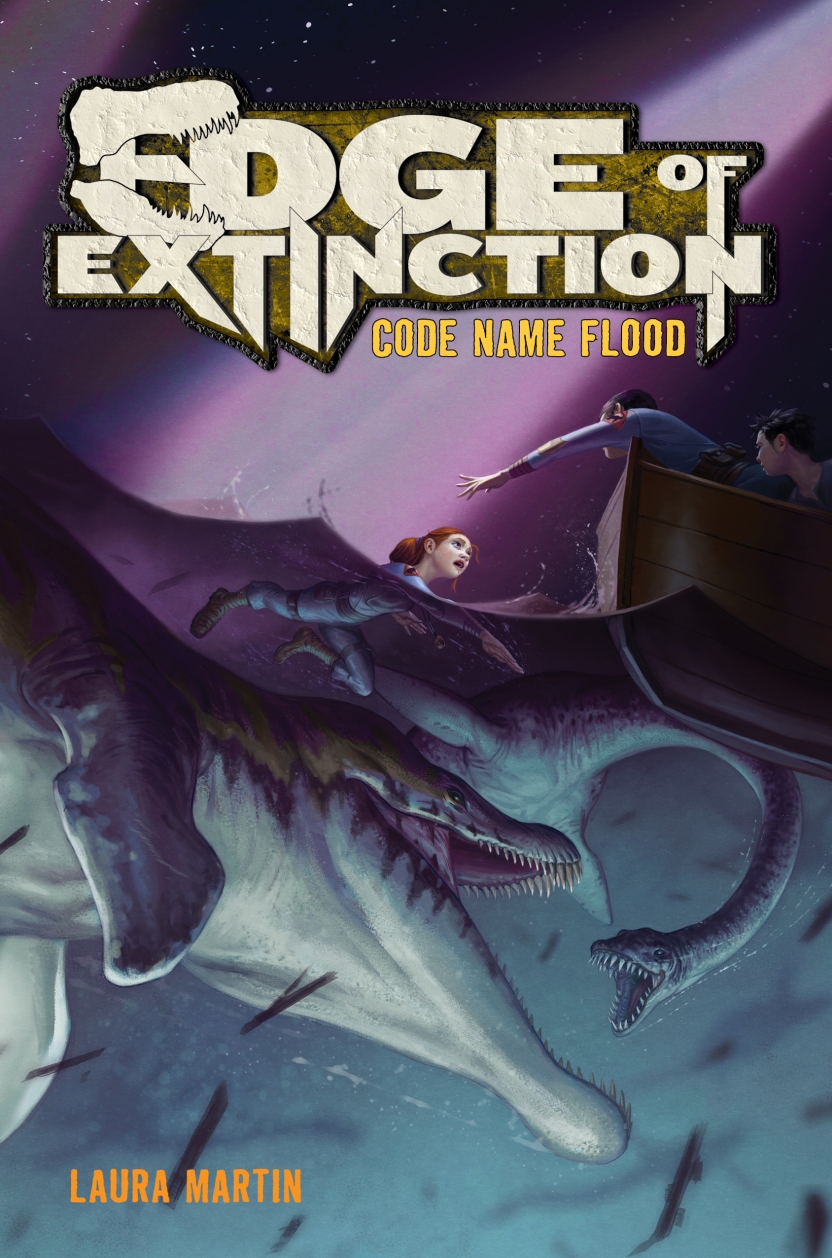 If you had told me ten years ago that I would think a book with sea monsters on the cover was beautiful, I would have told you that you were crazy. But, remember this friends, when we achieve a life-long dream, it might not look the way we thought it would. Life is surprising that way.

I think they look nice together. Don’t you? 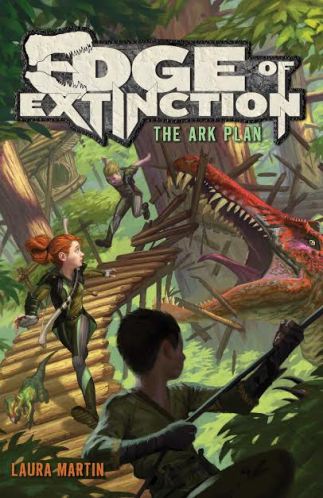 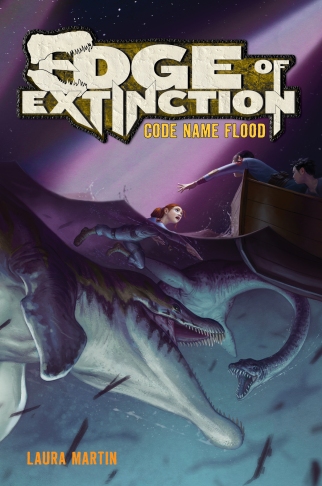 I have huge prints of them hung over the desk in my office. And someday, when I clean all the paperwork, dog collars, random kid toys, pens, expired coupons, and clutter off my desk…I’ll post a picture to show you. But, since I’m kind of an atrocious housekeeper (I wasn’t kidding about the moldering leftovers in the back of the fridge)…I wouldn’t hold your breath on it.

Here is the fun part. I have a few ARC copies of Edge of Extinction-Code Name Flood sitting here, and I’d love to give one away! Want to win it? Here’s how you enter. 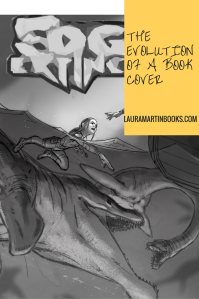